Jigsaw was a Children's BBC programme shown between 1979 and 1984. It was usually shown on a Thursday afternoon between 4.25pm and 4.55pm. This page collates information from other websites so that it's all in one place.

If there are any inaccuracies or further information, then please contact me. I hope that this page will jog some memories!

The programme was presented by Adrian Hedley and Janet Ellis (later Julia Binsted). Howard Stableford (later in Tomorrow's World) joined for the final series, taking over as the voice of Jigg and Biggum, and also as Gregory Growlong the gardener!

Each letter would be identified via a sketch of some variety. At the end of the programme, Mr Noseybonk (a man wearing a mask with a very, very long nose) would run around a park or some such location looking at different objects - the first letters of these prominent objects being the answer to the write-in competition.

The aim was come up with a full six-letter word - the jigword - taking a clue from each sketch.

The animated character Jig would reveal the competition word from the previous episode and introduce other games and puzzles. 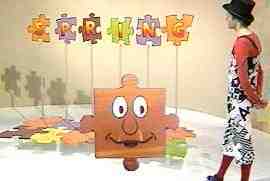 Hedley wore dungarees and a top hat. He was an accomplished mime artist of the glass ceiling variety...
Hedley (who did speak!) was the main man throughout. I can't really remember what Ellis did, but I don't think sticky backed plastic was required.

Other characters included the O-Men (Sylvester McCoy and David Rappaport), Biggum the giant (all you ever saw of him was his sandal) and Pterry the pterodactyl.

Another character that appeared was Cid Sleuth (David Cleveland). He was basically The Prof (from 'Vision On') dressed up like Sherlock Holmes. He appeared in the earlier series of Jigsaw, with each short film giving a clue to a letter or the whole jigword. David Wyatt also appeared in these as a thief whom Cid was always trying to catch. 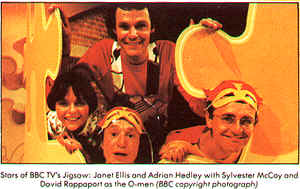 The programme was devised by Clive Doig whose quizzical shows delighted BBC bosses for 20 years. Jigsaw was a programme for swots designed to increase their attention span and short term memory. Mr Noseybonk seems to have been thrown in to give people nightmares.

The search for Mr Noseybonk

Mr Noseybonk was Adrian Hedley in a white bleached head. He has not been seen on our screens for over 15 years. It is incredibly difficult to find him on video tape, when a complete episode was found it was one of the rare episodes that did not feature him. Until now...

Noseybonk was scary. Contrary to popular belief he was not featured in any of Tony Hart's programmes. As far as we know he was only ever featured in Jigsaw.

Where are they now?

Things to look out for

Liable to turn up on EBay, in second-hand book shops or in car boot sales - it's the Jigsaw Annual! 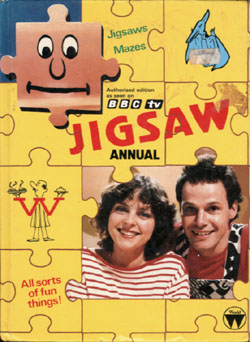 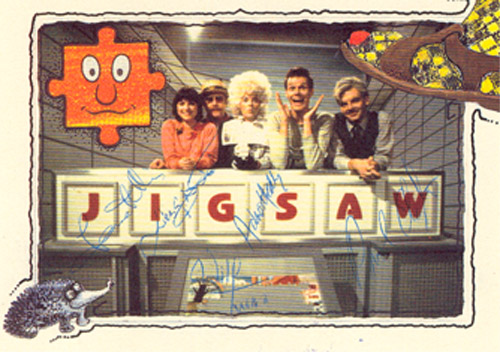 
Children's Carnival is the old Story Teller advert tune, but we can vaguely remember it being used as the music accompanying a clue sketch in Jigsaw. This was confirmed by Kevin Fardell on the 3rd of January 2003: "The fifth letter is the initial letter of the last circus act". Thanks Kevin!
Full version of Children's Carnival found by Mark McMillan on Electronic Toys August 2005.

RealPlayer 8 is required to play these clips.

For video clip 1 just click the link once and Real Player will stream the clip.
For the other clips just hover over the Real Player 8 icon, press the right mouse button and "Save Target As...". The clip will download in a few minutes and can be played from the hard disk.

Many thanks to the following people, without whom this page would not have been possible.


Ask The Family
B3TA
Everything2.com
The TV Lounge
Watched It!


Also, thanks to Mark McMillan, Dave May, Paul Taylor and Kevin Fardell.

All copyright is acknowledged. If you use images or clips from this web page then please include a link back here!

In 2008 a splendid website was created by someone who has made their own Noseybonk mask. They've also made a few short films.
Noseybonk Again

Jigsaw and Noseybonk were mentioned in Charlie Brooker's Screenwipe (BBC 4, Series 4, Episode 5, Original transmission date: 16/12/2008) in an episode about Children's Television. The Noseybonk Again character made a short cameo in this programme and it included some real Jigsaw and Noseybonk footage from the BBC Archive.